Kinukake-no-Michi is the scenic road for exploring three UNESCO World Heritage sites, Kinkakuji, Ryoanji and Ninnaji. It runs approximately 2.5 km through the green foothills of Mt. Kinugasa, beginning with the stroll from Kinkakuji to Ryoanji – about 18 minutes – and continuing on to Ninnaji, another 11 minutes or so farther on. From directly in front of Ninnaji, it's an easy ride on the quaint Randen tram to the heart of the scenic Arashiyama area. This is the best route to get from Kinkakuji to Arashiyama.

In addition to the World Heritage sites, numerous other major Kyoto attractions are scattered around the Kinukake-no-michi road, including the Tojiin and Myoshinji Zen temples, and the Kitano Tenmangu Shinto shrine. The area bears witness to Japan’s medieval history – the Heian, Kamakura and Muromachi periods – when the imperial family and the aristocracy were at their zenith. Generations of emperors lie in tombs which dot the area. 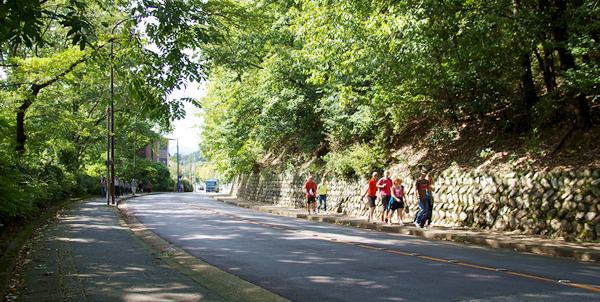 The road that is now Kinukake-no-michi used to be known simply as a “scenic route” through north Kyoto until 1991, when the area’s promotional council invited the public to propose a new name, better reflecting the road’s rich heritage. Kinukake – literally, “draped with silk” – was selected. The name derives from the famous command by the ninth century Emperor Uda that he be able to gaze out on a snowy landscape even in mid-summer, which was fulfilled by covering the slopes of the nearby mountain with white silk.

Over time, 'Kinukake-no-michi' evolved from a popular nickname to the official designation found in maps and tourist guides. Today, visitors from across Japan and around the world refer to the route as the Kinukake-no-michi road, and locals call it by the same silk-draped name as well.